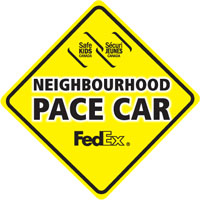 Danilo Orcozo, co-ordinator of THCA’s Public Safety Concerns is concerned with speeding and aggressive driving in our neighbourhood.   It is one of the top five concerns in Ottawa neighbourhoods.   Since the association’s inception, speeding has been concerned and THCA was instrumental in having STOP signs, and No Drive through from Roydon as measures to calm traffic.

When driving:  residents agree to drive the posted speed limits.  Cars become a “mobile speed bump” slowing speeding traffic behind them. Traffic is not only calmed on Benlea, Medhurst and Woodfield  but throughout our neighbourhood.  Drivers also agree to be more aware of, and courteous to, other road users –  cyclist,and pedestrians, particularly at crosswalks.

Many Pace Cars: calm traffic throughout a neighbourhood. Our 2012 target of participants is six.  The more people who participate, the better it works!

Other ways to slow traffic:  consider Benlea, Brockington, Canbury, Dalehurst, Downsview, Foxmeadow, Lansfield and Nestow have no sidewalks.  The simple presence of people in the street, walking or cycling helps reduce traffic speed.

Next Steps : Download sign-up sheets and pledges forms from Safe Kids Web site.   Send forms to Danilo at [email protected]  .  He will provide you with a deco.

Once a Year Renewal   Drivers should renew their commitment after one year and that anyone no longer participating should remove the stickers and decals from their car.