(Ottawa) — The Ottawa Police Service Robbery Unit is investigating the recent robbery of a gas station and is seeking the public’s assistance in identifying the suspects responsible.

On October 22, 2016, at approximately 11:30 pm, a lone male, suspect, partially disguised, entered a gas station situated along the 1500 block of Woodroffe Avenue. The suspect made a demand for cash while threatening the employee. The suspect grabbed money from the register and fled the scene. No weapon was seen and there were no injuries.

The same suspect is believed responsible for a similar robbery on October 23, 2016, at approximately 1:30 am, at a gas station situated along the 3500 block of Strandherd Drive.

The suspect was described as being a black male, tall, skinny build, wearing a black hooded shirt hood up, black round sunglasses, light-coloured jeans, and white runners with a black stripe along the heel (images attached.)

Anyone with information regarding these robberies, or any robbery, is asked to call the Ottawa Police’s Robbery Unit at 613-236-1222, ext. 5116.  Anonymous tips can be submitted by calling Crime Stoppers toll-free at 1-800-222-8477 (TIPS), or by downloading the Ottawa Police app. 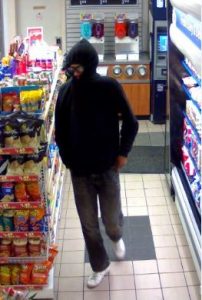 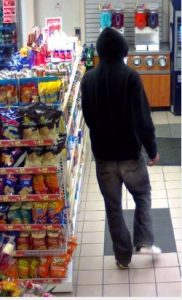